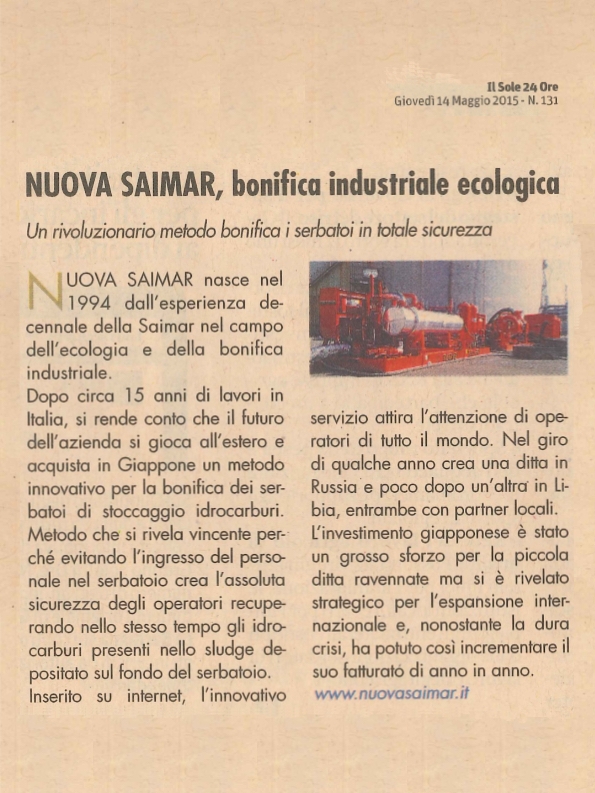 We are pleased to announce that on the 14th of May, the Italian National Newspaper “Il Sole 24 Ore” has published an article about Italian companies that innovates and challenge the economic crisis, edited by Confindustria of Ravenna, which text is sent you in attachment, and the relevant translation here below:

Nuova Saimar was born in 1994 from 10-years’ experience of Saimar in the field of Ecology and Industrial Cleaning.

After about 15 years of work throughout Italy, it has realized that the company’s future is abroad and purchases in Japan an innovative system for hydrocarbons-storage tank cleaning. It soon proves to be a winning decision, as it avoids people to enter the tank ensuring the total safety of the operators, and recovers, at the same time, the hydrocarbons contained in the sludge settled in the tank bottom.

Thanks to a widespread promotion on the web, it has gained the attention of worldwide operators. In a few years’ time, it creates a company in Russia and after a while another one in Libya, both with local partners.

The Japanese investment had been a great effort for the little company from Ravenna, but it revealed to be a key element for international development, and, despite of the major crisis, allowed Nuova Saimar to increase its turnover year-on-year.